Titus Andronicus: Breaking it Down 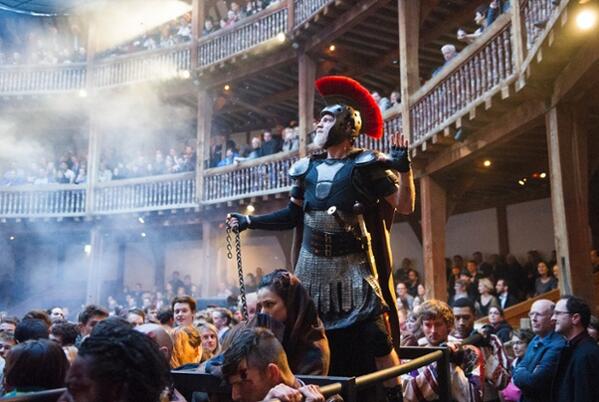 A WAR: Titus Andronicus begins with the death of the emperor of Rome, right at the same time that Titus, Rome’s warrior, arrives home from a successful battle against the Goths. Titus brings with him as prisoners Tamora, the Queen of the Goths, and her three sons. Deaf to Tamora’s entreaties for mercy, he slays the oldest of the boys as a sacrifice to war.

A THRONE: The emperor’s two sons vie for his throne, but the popular vote offers it to Titus. Titus refuses the honor in favor of Saturninus, the emperor’s older brother.

A WEDDING: Saturninus becomes emperor (now called Saturnine) and immediately snatches Titus’ daughter, Lavinia, from the arms of her fiancé, his brother Bassianus. When Saturninus sees Tamora, however, he gives up Lavinia and marries the Goth Queen instead.

A RAPE: Tamora’s sons, Chiron and Demetrius, lust after Lavinia. Tamora’s secret lover, Aaron the Moor, convinces the two boys to take her by force. During a hunting party, Lavinia and Bassianus find Aaron and Tamora in the woods together and threaten to tell Saturnine of her infidelity. Chiron and Demetrius stab Bassianus and throw him into a pit. They drag Lavinia off to rape her. They cut away her tongue and hands so that she can’t tell of their guilt.

A PIT WITH TWO SONS: Aaron lures Titus’ sons, Martius and Quintus, to the pit in order to frame them for the murder of Bassianus. Saturnine blames Titus’ sons for Bassianus’ death and takes them prisoner.

A HAND AND TWO HEADS: Marcus finds the mutilated Lavinia in the woods, and takes her to Titus. Aaron brings word that if Marcus, Titus or his remaining son, Lucius, will send Saturninus a severed hand, the emperor will send back Titus’ two imprisoned sons in exchange for the hand.  Titus sacrifices his hand, but a messenger returns, bringing back Titus’ hand together with the severed heads of Martius and Quintus.

A REVELATION: Titus sends Lucius, his only remaining son, into exile for protection.

Lavinia uses her mouth to write the names “Chiron” and “Demetrius” in the dirt with a stick. Aaron realizes that Titus has discovered the boys’ guilt.

A BABY: Suddenly, a nurse rushes in to announce that Tamora has given birth to a black baby. Tamora has ordered the baby to be killed and disposed of in order to hide her infidelity from her husband. But Aaron, vowing to keep the child, kills the nurse and takes the baby to the Goth camp for safety.

A RUSE: Titus, pretending to be mad, orders his followers to shoot arrows into the sky with letters attached, begging the gods to assist his revenge. Word arrives that Lucius has joined with the Goths and is bringing an army to conquer Saturnine’s corrupt Rome.

A CONFESSION: Aaron finds his way to the Goth camp, where he reveals his crimes to Lucius in exchange for sparing the life of the child he carries with him. A Roman messenger offers Lucius a meeting to negotiate with Saturnine at Titus’ house, and Lucius accepts.

A REVENGE: Believing that Titus is mad, Tamora and her sons appear at his house, disguised as the gods of Revenge, Rape and Murder who will answer his letters. Titus begs Tamora to leave Rape and Murder with him for a while. The instant she leaves, Titus orders Chiron and Demetrius to be bound and gagged.

A TASTY PASTY: Titus slits the throats of Tamora’s two sons, and Lavinia collects their spilled blood. Titus prepares a pasty with their blood and powdered bones and bakes their heads into two pies.

A FEAST: Titus welcomes Lucius, Marcus, Saturninus and Tamora to his home, serving Tamora her own sons’ flesh for dinner. After killing Lavinia to quell the shame she has suffered, he reveals what is in the pie and stabs Tamora.

A DOMINO EFFECT: Saturninus immediately kills Titus, and Lucius in turn kills Saturninus. Lucius becomes the new emperor, and orders all the bodies buried except for Tamora’s, which is to be thrown to wild animals; and he orders Aaron to be buried chest-deep in the ground to starve to death.

A BOY: The play ends with the departure of Lucius and Titus’ brother Marcus.  Young Lucius is left alone with his grandfather’s corpse.