Home Support Us Band of Funders

Won’t  you Join our Happy Band?

Together we shall be Triumphant…
JOIN OUR HAPPY BAND OF FUNDERS!

“We Few, We Happy Few, We Band of Funders…” – We Need More of You!
Our “Band of Funders” consists of 100 Napa Valley businesses, groups and individuals who donate $500 or more each to support our performances and programs

Donations at the $500 level and above receive membership in the Band of Funders.
Members of the BAND OF FUNDERS receive prominent recognition in our show programs and on our
website, receive early or exclusive access to our exciting sure-to- be-sold-out presentations, and gain favourable treatment from the Gods of Theatre. 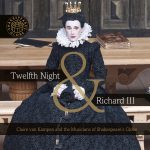 And yes…our Band of Funders are eligible for our special Birthday CD Offer!

Our thrilling presentations of the London’s Shakespeare’s Globe Theatre live on stage in the Napa Valley: Much Ado About Nothing and King Lear, Fiasco Theater’s acclaimed Cymbeline, and our world premiere of Measure + Dido starring Derek Jacobi – each with free school shows, invited rehearsals or  in-school presentations by the stars, and our sold-out screenings of Shakespeare captured on stage in London in digital HD – including “Twelfth Night” starring Mark Rylance and Stephen Fry, provided just a taste of what’s to come. We are currently planning a star-studded play inspired by Abraham Lincoln’s lifelong love of Shakespeare, a staged reading helmed by one of Broadway’s most acclaimed directors, a symphonic performance of music inspired by Shakespeare conducted by a legendary Maestro and narrated by a film legend, a thrilling presentation for students performed by one of the country’s most prestigious theatre conservatories, a lively speaking engagement by a foremost authority on the language of Shakespeare, and solo shows by the world’s greatest interpreters of Shakespeare to be held on quintessential Napa Valley stages, including the courtyard of the Castello di Amorosa. Plus an expanded season of Shakespeare on Screen, and more live from London’s Shakespeare’s Globe Theatre!

BUT WE MUST BAND TOGETHER TO MAKE IT HAPPEN!

Please consider investing in the future of world-class theater in the Napa Valley by supporting our programs with a financial contribution. Join our Band of Funders, make a contribution, or encourage your business or employer to become a Sponsor.We need your help to continue the momentumof this, our inaugural season, andwe look forward to enjoying more amazing Shakespeare together!

Other Ways to Contribute:

BE A GENEROUS GROUNDLING: Make An Individual Donation Today!

Every contributor makes a difference, helps to support our shows, and endows our educational and community programming.
(And you needn’t be a Groundling…Largess from Royalty Welcome!)

We Will Work for Wine!
In-Kind donations of food, wine, product and services are invaluable for our Fundraisers and Events.

Bringing world-class professional Shakespeare and classical theatre to the Napa Valley.
We can create a package of sponsorship and a donor relationship that meets your unique goals and requirements.