Home Dramaturgy Measure for Measure + Dido and Aeneas: A Shakespeare-opera mash-up from 1699 takes the stage

Measure for Measure + Dido and Aeneas: A Shakespeare-opera mash-up from 1699 takes the stage 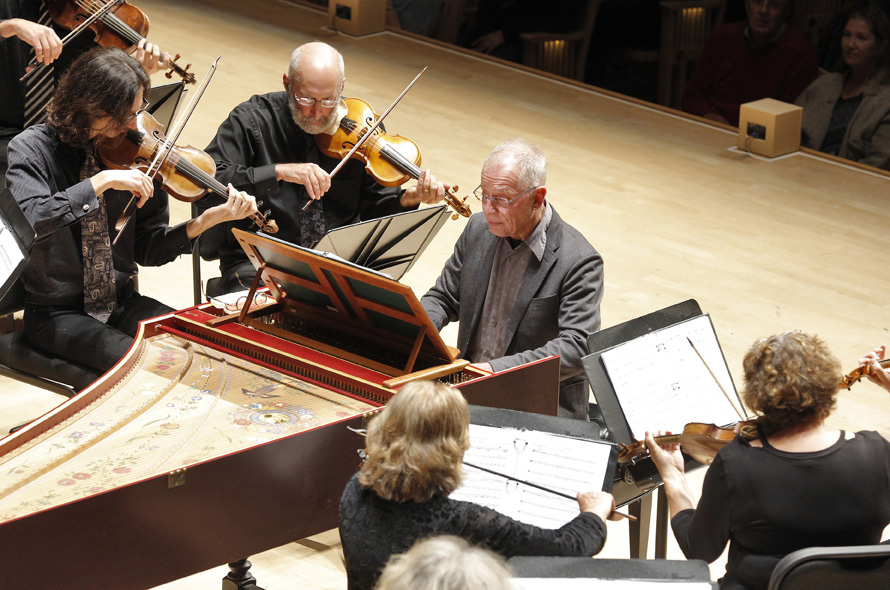 Sometimes characterized as a “problem play,” Shakespeare’s Measure for Measure was first performed in the early 1600’s and was printed in the 1623 First Folio where it is listed as a comedy. During the Restoration, many of Shakespeare’s plays were adapted to suit the times, and Measure is no exception. Playwrights deleted problematic characters, moral complexities, and language that Restoration audiences would have found objectionable.

In his 1665 adaptation of Measure for Measure, William Davenant made considerable revisions and even took the liberty of inserting Much Ado About Nothing’s characters Benedick and Beatrice into the play—Benedick as Angelo’s brother.

Working from Davenant’s play, Charles Gildon later produced his own adaptation in 1699 at Lincoln’s Inn Field, in which he removed Beatrice and Benedick and combined the simplified story of the play with a full performance of Henry Purcell’s Dido and Aeneas.

This fall, Folger Shakespeare Library’s early music ensemble-in-residence, Folger Consort, has brushed the dust from this Shakespeare-opera mash-up to bring it to the stage first in California’s Napa Valley [at Napashakes] and then at the Kennedy Center in Washington, DC, on Oct 1.

Plans for the production arose out of a Folger Institute weekend workshop on “Performing Restoration Shakespeare,” led by Amanda Eubanks Winkler and Richard Schoch in November 2014, in which scholars collaborated with actors and musicians to stage scenes from Gildon’s work.

The theatrical concert pairs passages from Shakespeare’s play with Dido and Aeneas, in addition to other music by Henry Purcell, as Folger Consort artistic co-director  Robert Eisenstein explains in this excerpt from the program notes:

“Our performance is inspired by a production on the Restoration stage written by author, poet, and playwright Charles Gildon (c.1665–1724). Gildon’s Measure for Measure, or Beauty the Best Advocate was printed in 1700. What is most notable about this version of the play is that it includes an entire performance of Henry Purcell’s Dido and Aeneas.

In fact the only time the opera was performed on the public stage in the 17th century was during a production of Gildon’s Measure for Measure at the theater in Lincoln’s Inn Fields in London in 1699. Gildon presents the opera as “a Mask, in Four Musical Entertainments,” corresponding to the three acts of the opera plus the Prologue. He uses the opera as a play within a play that entertains Angelo and forces him to consider his designs on Isabella.

Our performance includes selected passages from Measure for Measure and all of Dido and Aeneas. We have added other music by Purcell as well, incorporating the ravishing New Ground for harpsichord and a few movements from another suite of theatrical incidental music, the famous Abdelazer, or The Moor’s Revenge. In the last act of the play this evening, in place of the music which is now lost for librettist Nahum Tate’s Prologue to Dido, we have decided to use the last few numbers of another of Purcell’s great operatic works, The Fairy Queen.

According to the music publisher Playford, “The Author’s extraordinary talent in all sorts of music is sufficiently known, but he was especially admired for the Vocal, having a peculiar Genius to express the energy of English words, whereby he moved the passions of his auditors.”

There is no question that Dido and Aeneas has an allegorical relationship to the 1689 Glorious Revolution of William III and Mary II and the parliamentary party. The author of the libretto, Nahum Tate, was England’s Poet Laureate and would have been expected to provide something glorifying the new rulers. The Prologue fulfills that obligation, honoring the monarchs with its descriptions of Venus’ descent to earth and Phoebus’ glorious passage over the sea. The opera itself refers to William and Mary’s unique division of the monarchy: in the first act Chorus we hear “When Monarchs unite how happy their state, they triumph at once over Foes and Fate.”

The only known performance of the opera while Purcell was alive took place in 1689 at a girls’ boarding school in Chelsea run by dancing master Josias Priest. Many scholars speculate about a possible earlier performance at court as it seems unlikely that England’s Poet Laureate and its greatest living composer would have collaborated on this project if it were purely the equivalent of a high school production. Purcell’s piece is in a very modern style and incorporates the French structure of solo ariachorus-dance as well as real Italian arias for Dido. Her first, “Ah Belinda,” is a da capo aria, and the famous concluding one, “When I am laid to earth,” is a powerful lament accompanied by the orchestra over a mournful ground bass. Hardly a 17th-century Venetian opera is without something similar.

Editor’s Note: The text of this blog post was adapted from the program notes for the performance.