Haggis, neeps and soliloquys: the bonds that tie Robert Burns and Shakespeare 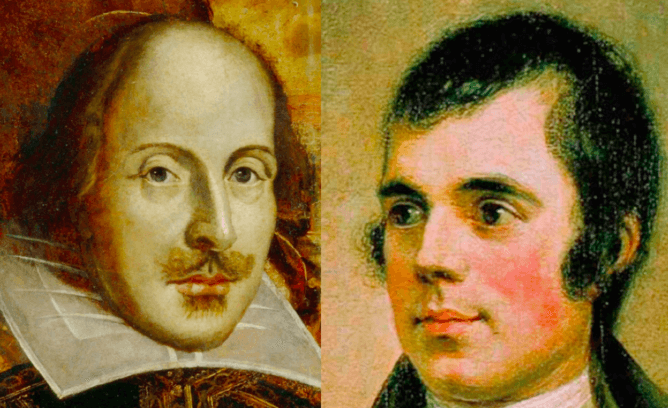 While Robert Burns lovers celebrate their great advocate for the common man on January 25, this year’s whisky-and-haggis feast for the birth of the Scottish bard risks being upstaged by a big literary milestone south of the border. This year is the 400th anniversary of the death of the bard of Avon, better known as William Shakespeare. As it turns out, the two countries’ national writers have a lot in common.

Both men would likely have been surprised at their elevations to the status of iconic cultural figures. Shakespeare had strong connections to Catholics and may have secretly been one himself at a time in Elizabethan and Jacobean England when such sympathies could be perilous. As he made his way in society, for example, one establishment commentator called him an “upstart crow” – boastful and above his station.

Burns was meanwhile hated by large numbers of Scotland’s Calvinist establishment. After they censured his liberal lifestyle in his earlier years, he responded by mocking their tradition through works like Holy Willie’s Prayer.

Yet in spite of their enemies, both writers were able to establish living reputations through sheer force of creative energy. Through Burns, for instance, Scots-language poetry came to be largely accepted in the west of Scotland when previously it was strongly associated with the east and especially the Jacobites, those 18th-century rebel supporters of the deposed Stuart dynasty. Shakespeare’s productivity, both as a playwright and as a stage manager, also made him a very public figure in his own lifetime.

William Shakespeare was a powerful influence on Robert Burns. If the latter exemplified certain Scottish literary and cultural traditions, he did so with Shakespeare in his DNA. In his letters, Burns turns to Shakespeare on several dozen occasions. I also count as many as 16 references to Shakespeare’s plays in his poetry.

There are a number of instances in which Burns inhabits the atmosphere of his predecessor’s works – the beautiful and powerful meditative poem A Winter Night does this with King Lear, for instance. Both works draw on the sense of man’s menace and power of forgiveness. Or take Burns’ phrase “man’s inhumanity to man”, from Man Was Made To Mourn: A Dirge. The paradoxical turn of phrase and sympathy, which helped establish Burns as the great poet of humanity, owe more than a little to his immersion in the works of Shakespeare – and is often mistakenly attributed to him.

Another thing Shakespeare and Burns have in common is the way their reputations grew after they died – and particularly flourished in the 19th century. This wasn’t just down to individual genius, but also British imperialism. Shakespeare became a staple of the educational curriculums of both America and India in the 1800s. Back in Britain, young gentlemen preparing for colonial careers had to know their Shakespeare as part of the Indian Civil Service exam. Burns’ work travelled well in that era too, carried to all corners of the English-speaking world by aspiring Scots who felt they could emulate their national poet’s story of great success through effort despite humble origins.

From Rabbie With Love.
Wikimedia

The two bards’ global reach was helped by their ability to inspire the downtrodden. Shakespeare was read by Nelson Mandela when he was imprisoned on Robben Island, for example, while his portrait stared down on the first Congress of Soviet Writers in Russia in 1934. They regarded him as someone whose works were full of sensitive portrayals of the common man.

Burns too had a Soviet fanbase, read in Moscow and elsewhere in the early 20th century as the proletarian writer par excellence who had so much in particular to say about peasant life. The Soviet Union produced the first ever commemorative Burns stamps in 1959 (see image). He was also read by many Indian socialists in that same period as they constructed a critique of their colonial condition.

Shakespeare and Burns write time and again about great vicissitudes in human life, as well as continuously hymning the beauty of creation. Both abhor fanaticism – for Burns, the hypocritical Calvinists; for Shakespeare, unbending Puritans. And both are great believers in gratuitous goodness. In The Merchant of Venice Shakespeare famously celebrates the grace in the kind, forgiving act:

The quality of mercy is not strained;
It droppeth as the gentle rain from heaven
Upon the place beneath.

Affliction’s sons are brothers in distress
A brother to relieve, how exquisite the bliss!

The heart benevolent and kind
The most resembles God.

This sense of common cause is something that is vital when we think about these two writers, especially because Shakespeare and Burns represent two nations seen to have been at odds in recent years. Their secret – whisper it – is that there is so much of minutely considered human experience in their observations and characters that people of any nationality can look at their work and see something they recognise. Really we ought to be emphasising the continuity between Shakespeare and Burns. If one is allowed to say this these days in a non-political way, they ought to be held in common cultural heritage as world writers by the whole of Britain.

This article was originally published on The Conversation. Read the original article.