Home Dance The Jig is Up!

The Jig is Up!

The cast of the Globe Theatre’s Richard II led by Mark Rylance ends an evening of tragic history on the BBC with a rousing traditional dance:

Audience members who’ve enjoyed our Shakespeare’s Globe Theatre productions, both live and onscreen, have noticed the actors ending the evening with a merry jig – no matter how comic or tragic the play that preceded it.  This Globe Theatre tradition dates from Shakespeare’s time, when actors would milk applause (and provide distraction for the audience as 2000 people filed slowly out of the theatre) by performing dances with comical leaping steps, accompanied by bawdy ballads. These lewd jigs, songs, and dances often met with official disapproval, and the actors were even warned to suppress such disreputable entertainments on pain of imprisonment.

Our dramaturg Philippa Kelly quotes from Stephen Greenblatt in his introduction to Norton Complete Works:
“A court order of 1612 complained about the “cut-purses and other lewd and ill-disposed persons” who flocked to the theater at the end of every play to be entertained by “lewd jigs, songs, and dances.’” 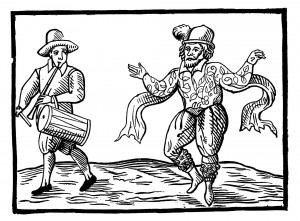 This contemporary woodcut shows English Elizabethan clown Will Kempe dancing a jig from Norwich to London in 1600.

In an excellent discussion of these jigs, Veronica Horwell writing for London’s The Guardian newspaper, explains:

“[N]otably through the work of music historian Lucie Skeaping, it’s clear that the jig was not a curtain-call, big-finish number for a curtainless theatre. Piece together fragmentary descriptions, playbooks, surviving music that fits the bill, plus literary and law and order complaints of the era, and the jig at the end of the gig sounds more like flipping the channel […] at the end of an evening’s viewing. Thomas Dekker groused that ‘the scene after the Epilogue hath been more blacke – a nasty bawdy jigge – than the most horrid scene in the play was’. He meant crude farce, topical standup, and always, always a dance.”

“The revived Globe attempted the full bill for a season, and bemused the audience, although most did vaguely expect the show to end in footwork. When Siân Williams joined as choreographer in 1999, that’s what they got, and they’ve appreciated it ever since. Williams has also worked with the RSC, and has a very corporeal understanding of the world of the 1590s and 1600s, how everybody lived in and with their bodies, how much life was physical labour (every bucket of water hauled, every ear of wheat sweated), and then people took their bodies out to play, the lower orders galumphing to rough music, while the grandest levels traced visible social connections in dance-floor patterns.”

“Where does the choreography begin? With the music….”
“Williams knew how the choreography for that sound and those plays should feel – “loose, chaotic, robust, free and then they suddenly anchor themselves” – the plebs moved that way, the patricians seldom achieved it.”

“And then come the performers. Globe actors are the most mismatched chorus line ever – short, tall, wide, narrow, chaps with three left feet, and Jamie Parker [who played Henry V], who can carry a Broadway musical, no problem. Most are apprehensive and Williams lets them develop things to build confidence and overcome their fears. The first session, they hear the music, she has the play’s cosmology and the recap outline in her mind, but ‘there’s no prescriptive structure. Little bit by little bit, we see the shape’ and the actors ‘have lovely things to offer, we adjust to their spontaneity’. Williams wants the jig to come from them – this isn’t choreography in a conventional sense.”

“That applies to dance within the play, too, as with her showstopping clog dance for the mechanicals (workmen who perform the play-within-a-play) in last year’s A Midsummer Night’s Dream. How did the actors do that? “Perseverance! It didn’t just belong to them, they took it over. They were mechanicals, they wore clogs all the time” – so they were creating character through movement, stomping was their dialect, their call and response, and that culminated into a dance-off between Pearce Quigley’s Bottom and Fergal McElherron’s Quince: ‘A lot is revealed in dance.’ They had the audience at their feet from the first stamp.”

Read the full article in The Guardian