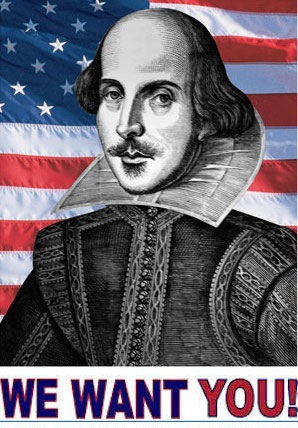 Get Ready for The Taming of the Shrew: Understanding the “Induction”

“Induction” doesn’t only mean “bringing someone to a position,” like inducting them into the Army or the Hall of Fame. It also means “bringing about or giving rise to” the action, as Shakespeare cleverly demonstrates with his Induction Scene in The Taming of the Shrew.
The much misunderstood and oft-omitted “Induction Scene” in The Taming of the Shrew sets up a play-within-a-play motif. Was Shakespeare using this device to sneak in some otherwise objectionable material? NapaShakes Dramaturg Philippa Kelly gets us ready for our Mother’s Day screening:

The Taming of the Shrew: what a ride. Speaking of riding (besides the fact that there is a horse in this play – it was Shakespeare’s favorite animal, so he inserted a horse wherever possible), in this time in history if a husband was not successful in taming his new bride, he was likely to be put on a horse and ridden around the town backward as a signal of his shameful lack of husbandry skills.But let’s start with the Induction, the opening scenes, set in England, not far from Stratford. In these scenes the drunken tinker Sly is tricked by a witty, leisured aristocrat into believing that he is actually a nobleman with servants, wife, unlimited food and drink, a collection of erotic art, and a troupe of professional players at his disposal. The actors perform a play for his entertainment (or at least until he falls asleep), an Italianate comedy about courtship and marriage. And so the play “proper” begins, shifting its setting from London to Padua…

The Christopher Sly subplot has often been left out of stagings, either wholly or in part. The original (Quarto) version has Sly rearing up to make commentary from time to time throughout the play, reminding us that this is indeed just a play, and telling us, in his drunkenness, that he can’t wait to go home and try these tactics on his own wife.  If these Quarto moments are left in the play (along with the Induction scenes), The Taming of the Shrew becomes much more of a self-conscious spoof on the ‘husbandry’ of Shakespeare’s day, where wives were treated as goods and chattels and believed themselves to be such.  And the Sly plot also consistently reminds us that this is London, representing Padua on-stage – that the mad Italians are the ones who treat daughters as real estate to be sold to the highest bidder, and that the English are really so much more refined….. (not)

Fun Fact: The Induction plot also features ale as Sly’s drink of choice. Ale (beer made with a top fermenting yeast) was ubiquitous in Shakespeare’s day. Everyone from the poorest farmer to the Queen herself drank the brew made from malt, and a mini brewery was an essential part of every household.