It Aint Easy Being Green

The Tumultuous Transformations of “The Green World”: 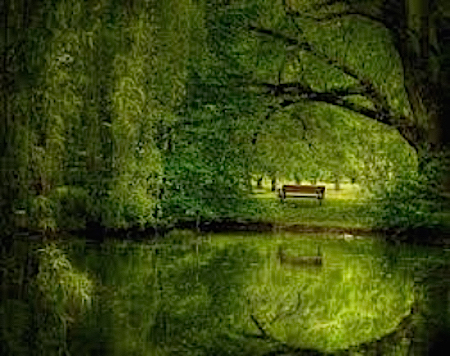 A Midsummer Night’s Dream is an example of Shakespeare’s use of forested and wild settings referred to by scholars as the “Green World.” The principal characters converge in this Green World and, free of the constraints of the “Real World” can work through and resolve all conflicts.

Our resident Dramaturg Philippa Kelly explains more about these dark and dreamy places of magic, transformation and discovery:

Two things happened in England’s natural world just prior to the writing of this play. There was a period of seasonal disorder so severe that it resembled today’s conditions of climate change. And in 1592 the plague hit London very hard, causing 17000 deaths, so that the woods – formerly a place to which vagrants had been banished – now became a place of escape from the plague. Both of these events are reflected in A Midsummer Night’s Dream. Queen Titania refers to the upset in the seasons in her famous speech where she speaks of seasonal disorder:

And thorough this distemperature we see

Far in the fresh lap of the crimson rose,

And on old Hiems’ thin and icy crown

Is, as in mockery, set: the spring, the summer,

Their wonted liveries, and the mazed world,

By their increase, now knows not which is which.

The forest in this play is a place of disorder as well as health. As the lovers move deeper into its ‘green world’, they move deeper into muddle-headed complication. And Titania sees herself and Oberon as their ‘parents and original’. It’s not for nothing that Shakespeare calls Oberon and Titania ‘King’ and ‘Queen’: in his day, the health of a whole nation was seen to be determined by the divinely-inspired decisions made by the regent. If the forest is the kingdom of the Fairy King and Queen, then it’s only natural that Oberon and Titania see the mortals’ misunderstandings as symptoms of the disorder between themselves within their realm.

But if the forest is the place in which mayhem is let loose, it’s also the very place in which complications are resolved: key to both mayhem and resolution is Puck’s love potion, as exercised by direct order from the king himself, Oberon. This may be seen as yet another direct link that Shakespeare makes with the England of his day. With the growth of cities, England’s largely agrarian economy was shifting, so that the city became the place of business and ‘urbanity’, and the country became a place that many people associated with simplicity and truthfulness. In locating its transformations in the forest, therefore, A Midsummer Night’s Dream is suggesting that the countryside is a place in which characters can explore their identity and understand more truly its profundity as well as the astonishing uncertainties and simple needs that we all share. In the forest we can be crazy, and our spirits can fly free. The forest allows people to chase each other around as they haven’t done since childhood; to fall in love, out of love, with no explanation beyond the simple action of wiping juice over someone’s eyelids. In the forest you can even find yourself offering heartfelt endearments to an ass. The forest is Shakespeare’s green world, where all things are possible and we witness as ‘true’ what is, within the cold limits of reason, wildly implausible.