Home Live Performances Updated: The Reviews Are In for “Much Ado About Nothing”!

Updated: The Reviews Are In for “Much Ado About Nothing”! 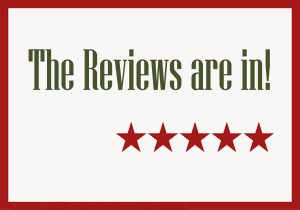 Much Ado About Nothing 2015

“The best of London in our midst” 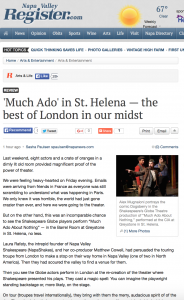 “Last weekend, eight actors and a crate of oranges in a dimly lit old room provided magnificent proof of the power of theater.

On tour (troupes travel internationally), they bring with them the merry, audacious spirit of of the day. They also bring their own set, not more than a doorway with a curtain, behind which are their costumes, musical instruments and minimal props (the crate of oranges).

It’s Shakespeare as it was done in his day (so we can imagine), and it’s wonderful. … The simplicity of the setup is all the more reason the players have to be brilliant. And they were.

Without stage lights, or for that matter, a stage, they presented the most memorable and most delightful production I’ve ever seen of Shakespeare’s much-loved and much-performed romantic comedy “Much Ado About Nothing.”’
November 18, 2015 by Sasha Paulsen
Napa Valley Register 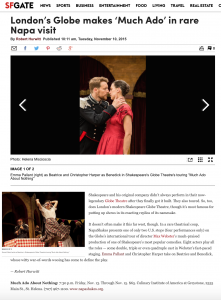 San Francisco Chronicle’s Robert Hurwitt writes:
“In a rare theatrical coup, NapaShakes presents one of only two U.S. stops (four performances only) on the Globe’s international tour of director Max Webster’s much- praised production of one of Shakespeare’s most popular comedies.”
November 10, 2015

The San Francisco Chronicle dubs NapaShakes’s presentations of Shakespeare one of the Top Ten Reasons to Visit Napa Valley Now!

NapaShakes is “Shakespeare by the best!”

Reviews from the Across the Pond…

“The dialogue flies, the performances across the board are engaging and full of energy and heart, and above all, it’s great fun”

“Christopher Harper’s wonderfully conceited Benedick is balanced measure for measure in Emma Pallant’s proud Beatrice, winning the audience over wholeheartedly with their spectacularly flawed and tempestuous relationship that really is a delight to behold’

“The strength and beating heart of this play, then, really is in the cast’s diversity.”

“bringing a boisterous knockabout sense of fun and spectacle, drama and emotion, to a space where sober black signs usually instruct visitors to stay silent.”

“Part rom-com, part Elizabethan soap opera, this is all edge-of-the-seat stuff which will appeal as much to the novice or the non-English speaking overseas tourist (of whom there were a number on my visit) as the scholar”

“in the hands of this talented troupe, it’s a damn good tale, tremendously entertaining, and laugh out loud funny”

“Pallant, whose tongue is as sharp as her mind, is outstanding”