Odd Man Out? What Motivates Macbeth? 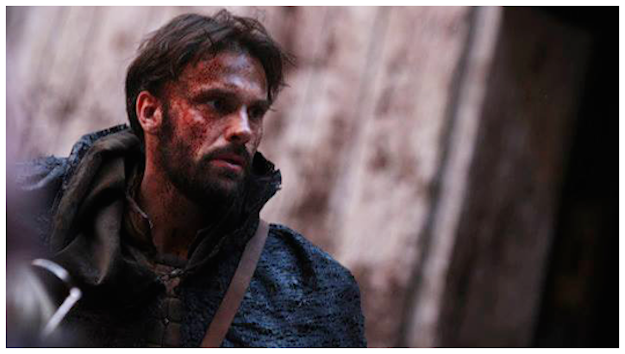 Joseph Millson stars as “Macbeth” when NapaShakes presents Shakespeare’s Globe on Screen at the Cameo Cinema on November 8, 2015

‘[I]t is far better to be a just man than an unjust prince.’ Erasmus, The Education of a Christian Prince (1518)

Tragedy openeth the greatest wounds, and showeth forth the ulcers that are covered with tissue; [it] maketh kings fear to be tyrants, and tyrants manifest their tyrannical humours; that, with stirring the affects of admiration and commiseration, [tragedy] teacheth the uncertainty of this world, and upon how weak foundations gilden roofs are builded. (Sir Philip Sidney, An Apology for Poetry)

Macbeth is one of Shakespeare’s shorter plays. The action is very tight, almost impacted. It’s difficult to begin to imagine how Shakespeare’s acting company learned this play, given that the playwright did not begin by distributing the script to the entire cast. Each of his actors would generally receive a copy only of his own lines, with the cues for entry and exit at either side – most likely for reasons of copyright. The actor would ‘con’ his lines, taking pride in embodying his own part fully; and many actors reputedly disdained the rehearsal process, even refusing to go to rehearsals. On first appearances this seems crazy – how could an actor understand the nuances of Macbeth’s emotional journey if he didn’t attend rehearsals? How could the Porter, for example, understand the underlying importance of “equivocation” in his part without knowing the context of the play? It appears impossible that the actors could adequately contribute to the production each in his own vacuum – until you think of life itself, where so many occasions find each of us fully embodying our own thoughts and oblivious to, or misunderstanding, the intentions of others.

Macbeth begins the play with the highest nobility. He is highly regarded, honorably appointed by the king, and eminently courageous against the traitor Macdonwald’s infamy. He is loaded with honors and wins more. As the play opens, we learn of his heroism; we see him interact with other nobles, and their friendship and esteem are evident, as is Duncan’s high regard, which expresses itself in terms of fertile growth, the beauty of natural processes, and spontaneous generosity, with promises of more to come. ‘Give me your hand,’ Duncan says to Lady Macbeth. ‘Conduct me to mine host: we love him highly,/And shall continue our graces towards him.’ All is well with the world, and Macbeth has made it so.

So the obvious question presents itself: Why does Macbeth decide to murder Duncan? Why is he not sufficiently content with the social and political position he occupies and the honored status he has acquired among his peers? This question is the very core of the play – it’s what makes it so fascinating, because Macbeth – like all of Shakespeare’s great tragedies – is about a man at odds with the very society that has produced him.