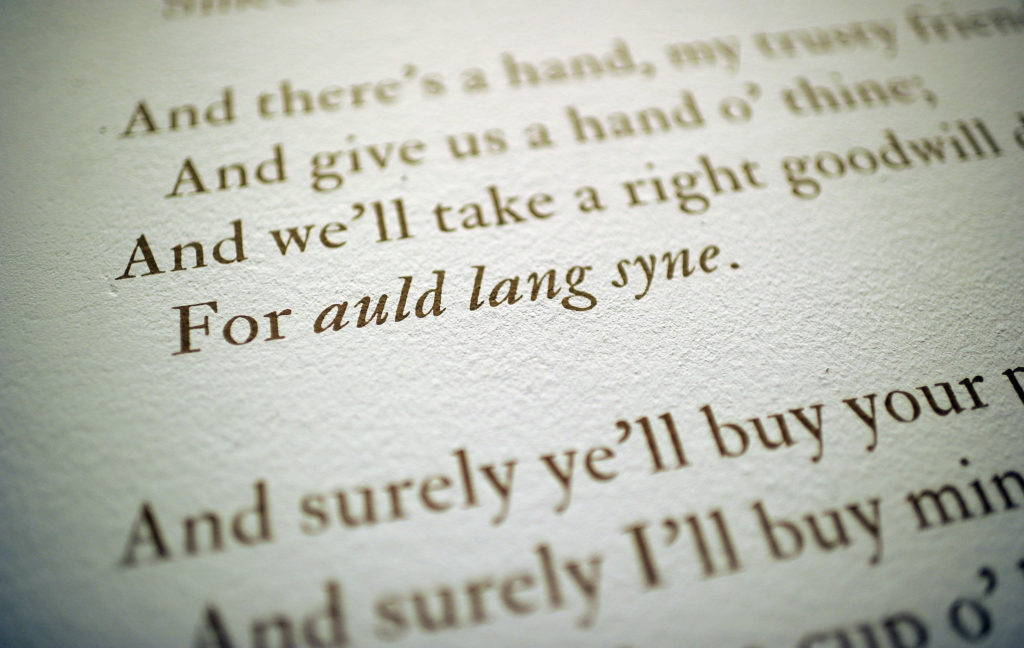 As the clock strikes midnight on New Year’s Eve, one song will usher in 2012 in time zones around the world: Robert Burns’s “Auld Lang Syne.” Even in Burns’s native Scotland, many people don’t understand all the words, but that’s done nothing to diminish the song’s appeal.

Although it’s most often associated with the new year, “Auld Lang Syne” is a global anthem of remembrance and fraternity: Type the title into YouTube, and more than 32,000 versions come up, sung by everyone from Aretha Franklin to Alvin and the Chipmunks to toddlers and their grannies. The song is sung throughout the English-speaking world and has been translated into more than 40 languages. “It has traveled and embedded itself in cultures across the globe,” said Burns biographer Robert Crawford. “It’s a malleable song — it’s quite unspecific about the nature of friendship — so it lends itself to many different occasions.”

Its title translates as “old long since” — “for old time’s sake.” On that point, there is consensus. But more than two centuries after Burns’s death, opinion is divided on the source of the song and how much credit he actually deserves. The poet — author of works such as “Tam o’ Shanter” and “To a Mouse” — denied that “Auld Lang Syne” was his. Rather, he said, “I took it down from an old man.” Burns, Scotland’s “Ploughman Poet,” was deeply connected with rural life. He traveled throughout the country collecting traditional songs for posterity. He also enjoyed remaking the songs — or “mending” them, as he called it. “Burns denied he wrote it because he didn’t,” said Murray Pittock, a literary historian. “He edited it, though how much we don’t know.”

Most experts think that “Auld Lang Syne” was created by Burns in 1788 using elements from a variety of source materials. These could date as far back as the 16th century and include works by the Scots poets Allan Ramsay, Robert Ayton and James Watson. “It’s impossible to say how many texts and tunes ‘Auld Lang Syne’ is derived from,” Pittock said. “Burns wasn’t the sole author,” Crawford said. “He was a co-author.”

Describing the effect “Auld Lang Syne” had on him, Burns wrote in a letter to his friend Frances Dunlop in 1788 that it “thrilled thro’ my soul.” The letter is on display as part of an exhibit at New York’s Morgan Library and Museum that attempts to untangle the complex history of the song. The show features rare printed editions, a manuscript of the song in the poet’s own hand and Burns’s letters from the Morgan’s collection.

“The genius of Burns was that he recognized the power of this old song, and he revitalized it and preserved its essential Scottishness while capturing universal sentiments,” said Christine Nelson, who curated the exhibit. “He had a genius for touching every note of human emotion.” Like its lyrics, the tune of “Auld Lang Syne” has a convoluted history. The version commonly sung today is not the tune Burns originally set it to, but the suggestion of his publisher, George Thomson. Gerard Carruthers, co-director of the Center for Robert Burns Studies in Glasgow, says Burns would have approved of this mix-and-match approach. “Burns was not a purist,” he said.

Although the poet was a proud man of the people, his popularity in North America owes a lot to New York’s most privileged citizens, according to Carruthers, who is researching the connection for a book. “Burns became very popular and very collectible in New York high society in the 1880s through to the time of the Great Depression,” he said. “You had these dances and people gathering in Times Square to welcome in the New Year that were attended by people like William Randolph Hearst and Henry Ford. They were the people collecting Burns’s manuscripts because they realized what a good investment they were. The American industrialists were into Burns because they saw him as a self-made man.”

Canadian bandleader Guy Lombardo also played an important role in popularizing “Auld Lang Syne” in North America. He adopted the song in 1929 for use in his annual New Year’s Eve broadcasts on radio and television.

“Some people recoil at the mention of it, but it’s a fact that the song needed the new media of radio and television to become the huge hit it is,” Carruthers said.

The full story of the most-performed song in the world after “Happy Birthday” may never be known, but one thing is certain: If Burns were alive, the profits from “Auld Lang Syne” would have made him a billionaire many times over.

by Claire Prentice, The Washington Post
December 30, 2011
Prentice is a freelance writer.